To give you the best online experience we may use cookies or similar technologies, and by continuing to use our website you consent to their use 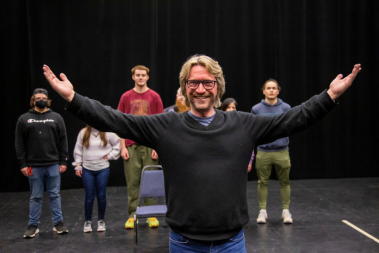 For artists, being an entrepreneur is a must. It's not enough to just have talent - you need to make your passion work for you. Entrepreneurial artists take the initiative and find ways to pursue their passions creatively and innovatively.

Whether it's through hustling to find gigs, branching out into side projects, or teaching classes and workshops, there are many ways for ambitious artists to make their passion a reality. Take Misha Albert’s journey as evidence.

Now a drama instructor at Northwestern Polytechnic (NWP), Albert originally attended the University of Waterloo to study biochemistry. His program required him to take a fine arts elective, and he opted for drama. Surprisingly, Albert had only been in one play in high school and hated it at that time.

During this class, Albert realized that acting made him happy, and he decided to switch to studying drama.

“I was taking my acting elective and I kind of went, ‘this is great,’" Albert said.

He was in the third year of his biochemistry degree and held his head high despite people telling him this wasn't a good idea.

“You're going in one direction and something happens and that changes your plans,” said Albert. “Had I been going to any other university; I always wonder if I would have had the same experience and ended up loving drama so much.”

"I didn't believe the people telling me it was a waste of time," Albert said. "I didn't think it could be bad since it made me so happy."

After graduating, he went on to perform in plays in Toronto and tour with various acting companies.

"I remember one Christmas, I had to leave my parents’ place early to head back to Toronto for a show I was rehearsing for, my dad noticed and said, 'he must be passionate about all of this.',” said Albert. “That made me happy - to hear my dad acknowledging it."

A bit of time passed, and a friend of Albert's invited him to live in Quebec. Once there, he accepted an exciting opportunity to host a segment for CBC radio.

Albert later furthered his studies and obtained a Master of Fine Arts from York University and went on to teach at various institutions, including Keyano College, before coming to teach at NWP.

Misha Albert's story is a testament to perseverance and creativity. It's an inspiring reminder for entrepreneurs, artists, and dreamers everywhere that anything is possible, no matter how impossible something may seem at first.